Challenger electrical panels are on fire! Really — check your panel today since it was popular in the '80s and '90s. They've since been discontinued. 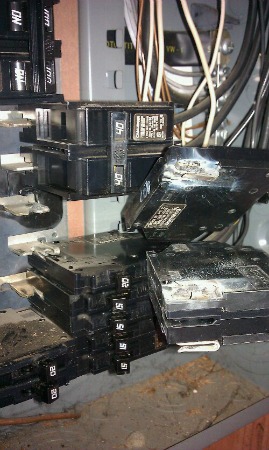 A melted electrical panel can be incredibly dangerous, so many homeowners whose homes were manufactured more than two decades ago find themselves in need of replacement panels. This Reply! guide will cover the basics of these Challenger panels, including the pros, cons and costs.

When it comes to electrical wiring, safety is absolutely important, and these products performed well under most circumstances. However, as many homeowners would later find out, the products were deeply flawed during the manufacturing process and not considered up to the general safety standards for home electrical products.

Challenger products did not always feature the brand name. Many of them were labeled as GTE-Sylvania. Homeowners should first try to locate products in their breaker panels with this brand name. It is quite likely that any such products will need to be replaced right away.

It is recommended that you do not try to do this by yourself, as wiring electrical problems can be dangerous. It takes professional expertise to install wiring properly and safely, so locating a licensed contractor for an estimate on replacing the faulty product is usually the best idea. Electrical how to guides are generally not sufficient to perform this type of work.

Challenger products often came with a warranty and the company did a fairly good job at honoring their product guarantees.

According to the Consumer Product Safety Commission (CPSC), Challenger issued a recall on some of their panels. This recall (http://www.cpsc.gov/en/Recalls/1988/Challenger-Electrical-Equipment-Corp-Offers-Replacement-Program-For-9000-GFCI-Circuit-Breakers/) is somewhat old, but it does show an awareness on the part of the company and officials that there was a problem very early on.

More than anything else, this is a major safety concern in older homes. As soon as you’re done reading this article, go to your electrical panel. If it says Challenger on it, schedule an appointment with an electrical contractor. It would be better to be wrong about the model that you have in your home than to have it start a fire or cause injury.

Wiring a circuit is a difficult process, and it turns out that the circuit breakers used in the Challenger electrical panels were faulty, causing the circuits to short out and overheat under normal circumstances.

Challenger electrical panels were known for their relatively low price point. Compared to other manufacturers of the day, it was a great brand in terms of affordability and quality. Unfortunately, the bad wiring of the circuit breakers wound up costing many homeowners far more than they saved with their initial purchase.

These faulty breakers wound up being sold to many other brands besides Challenger and GTE-Sylvania and caused many recalls to take place around the country. It is estimated that hundreds of thousands of homes used these faulty products and many of those were affected by the overheating malfunction.

Now that you know the basics of Challenger electrical panels, including the failure of the brand, safety concerns and general pricing, you can make an informed decision on whether or not to replace this product in your home. When you're ready for a new electrical panel, hire qualified electrical contractors.