A comparison of Swann and Lorex wireless home security cameras

First, though, let’s talk about the merits of wireless versus wired.

Wireless cameras are easier to install and they can offer a broader range of locations for installation. If you can stick a camera on the peak of your roof, it will be much easier if you don’t have run wires to it. Since there are no wires, there are no wires for a burglar to cut. One downside is power. Many wireless cameras run on batteries, so you will need to plan to replace those. Others are solar: no batteries, but a lot of clouds and you can’t see. Still others require power, which is fine, but now you’re running wires again.

Wired cameras are usually a bit more reliable, but they also have problems. It’s easy for a bad guy to cut the wires and make you blind. They are more difficult to install, because there are cables that have to be run from the camera to the monitor. They won’t need batteries and generally don’t run on solar power simply because, since you’re running wires anywhere, they have you run power lines. It might be easier to keep dozens of wired cameras straight on a monitor, especially if you’re installing them yourself. At that, self-installation of several wired cameras is not likely a good idea.

Now let’s take a look at two of the better wireless camera providers on the market.

Swann Security
Swann is an Australian home security system company that started off manufacturing modems before moving on to home security. Swann offers two home security cameras, which may be an issue with people looking for a lot of choice. Both cameras offered have the following features:

Since you can't connect to the Internet to view your video feed, this system may be a bit inconvenient for the person who's constantly on the go. For someone who's usually at home, it's a simple system with intuitive instructions, making setup a breeze. The Swann system will cost you $174.

Lorex Security
The Lorex surveillance camera is considered one of the best cameras on the market. The cameras offered by the company have all the features that you expect with top security cameras along with decent resolution. The basic camera system offered by Lorex has the following features: 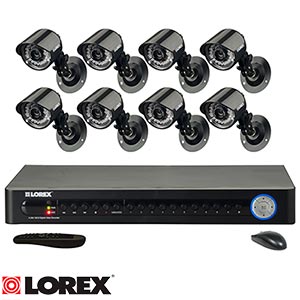 The Lorex surveillance camera system can transfer the video feed from your home system over networks through the use of IP-enabled cameras, making this the perfect system for the person who's away from home a lot. All you'll need is an Internet connection. The large DVR drive is another positive. When the drive is full, you can set up the system to have it override the existing data, or you can have it move the old data to an external drive before it resumes recording anew. The camera system is easy to set up even if you have very few DIY skills. This system is ideal for people who need a decent-sized camera setup and who are constantly on the go. The Lorex system will cost you $479.99.

At the end of the day, it boils down to the size of your home and how much money you can afford to spend. As you can see, Swann wireless security cameras and Lorex wireless security cameras differ greatly. Don't forget to check out additional surveillance camera reviews to get an idea of home surveillance prices for other systems before making your decision. Reply! can continue to help you with your search.