When comparing York vs. Frigidaire AC units, the choice will primarily come down to the type of AC you want.

Depending on your living situation, you may prefer a large central air conditioner, a window-mounted AC unit, a split system, or a portable AC. Your needs will determine the best company for you when comparing York vs. Frigidaire AC units.

Get free quotes on York vs Frigidaire ACs today!

In order to determine which unit is more energy efficient when comparing York vs. Frigidaire AC units, we must compare the seasonal energy efficiency ratio (SEER). The higher the number, the less power the machine uses to produce the same amount of cool air. Due to federal regulations, 13 SEER is the lowest rating you'll see when comparing ACs. 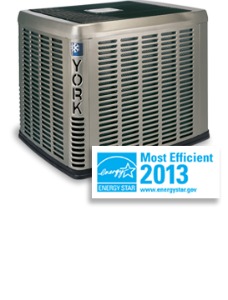 York makes large, powerful split-system AC units that you put outside and distributes cool air throughout your house through air vents.

York has three series with multiple units in each group. The Latitude series is the entry-level group with two units. The first unit is rated at 13 SEER and the second is rated at 14.5 SEER.

The LX series is the mid-level group, containing two units, rated at 13 SEER and 14.5 SEER. The LX series features smaller units, but is similar to the Latitude series.

There are three units in the top-rated Affinity series, rated at 13 SEER, 16 SEER and 18 SEER. These units represent the best York has to offer in terms of quality, reliability, quietness and efficiency. The air conditioner prices for these units are much higher than many other options. 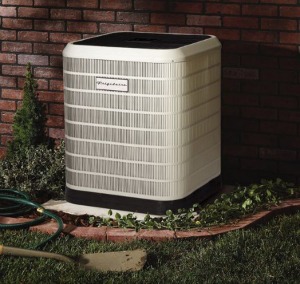 In the battle of York vs. Frigidaire AC units, Frigidaire is the winner when it comes to more options. It offers built-in ACs, designed to be installed into a wall. These units can be setup aside from the rest of the HVAC system to cool a specific area or placed throughout the house.

Window-mounted ACs are similar to built-in units except they are installed onto a window and vent air outside your home.

The final type of AC units offered are portable air conditioners. These units are the cheapest and do not have to be installed. Simply plug in the AC and you are all set.

A portable AC is best for a single room or area, just like a window AC.

If you are planning to purchase anything other than a portable air conditioner, it's best to hire a contractor to install your air conditioner. Often, your warranty will be invalid if the AC is not installed by a licensed contractor. Most contractors will give you a free estimate without requiring you to commit to anything.

The correct AC unit for you will depend on your personal needs. When comparing York vs. Frigidaire AC units, the choice will primarily come down to the type of AC you want. York only makes split-system units. For anything else, Frigidaire is your best option.