A York vs. Maytag AC comparison shows Maytag is the company to choose if you are looking for the most energy-efficient unit.

York and Maytag are two well-respected companies when you need an air conditioner to meet your HVAC needs. This York vs. Maytag AC comparison will not look at every unit created by both companies, but it will compare the pros and cons of choosing an AC unit from either company.

Get your free quotes York vs Maytag ACs today!

One of the most important concepts to understand is the seasonal energy-efficiency ratio (SEER). Each air conditioner is assigned a SEER value that indicates how energy efficient it is.

An AC with a higher value will use less energy to cool down the same volume of space as a lower-rated unit, thus saving you money on your energy bill.

As you compare York vs. Maytag AC units you will notice York doesn't offer as many air conditioners as Maytag. York has divided its air conditioners into three series: the Latitude, the LX and the Affinity.

The Latitude series features two AC units: one is rated at 13 SEER, and the other is rated at 14.5 SEER. The higher-rated unit features an Energy Star label, indicating that it's 15 to 25 percent more efficient than standard models.

The two units in the midlevel LX series have SEER values the same as the units in the Latitude series. However, these ACs are smaller and colored differently.

The three units in the top-of-the-line Affinity series have values of 13 SEER, 16 SEER and 18 SEER. The two higher-rated units feature QuietDrive technology; a series of improvements designed to make the air conditioners run as quietly as possible.

In addition, some of the pros of choosing a York unit are:

However, there are some downsides to choosing a York unit, such as:

In addition to the cost of the AC unit, you need to consider what it will cost to install your air conditioner when you hire a contractor.

Unfortunately, York doesn't reveal air conditioner prices. If you would like an estimate for a York AC, get quotes from local contractors. 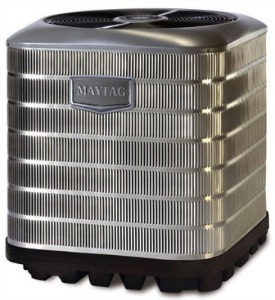 The York vs. Maytag AC comparison reveals numerous pros for choosing a Maytag unit, such as:

Some of the potential cons of choosing a Maytag unit include:

Just like York, Maytag doesn't reveal prices on its website. You will need to seek quotes from professional contractors to get an accurate price for your area.

A York vs. Maytag AC comparison shows Maytag is the company to choose if you are looking for the most energy-efficient unit. If you're looking for an entry- or midlevel unit, the decision is closer and comes down to pricing and how much you value the longer Maytag warranty.