What to do when you have frozen or burst water pipes?

Amongst the most widespread problems in the plumbing system is that of frozen or burst water pipes.

Burst Pipes are a modern day curse. Cities are getting increasingly overcrowded and populations are increasing leaps and bounds. Modern plumbing techniques are designed to integrate the various features such as boilers, garden and waste disposal. A burst pipe can cause havoc. Not only is the pipeline damaged but also the leakage of water in various parts of your home can cost you dearly.

Sometimes, pipes do fail on account of age, damage or mishandling. Pipes can be subject to tremendous pressure and faults may be exposed with passage of time and broken down. Sometimes, burst pipes can be extremely devastating. If a main pipe bursts it can put you out of your home, prevent access to water and cause immense property damage.

Pipes are most vulnerable to freezing when they are located either in an outside wall, under a sink in an outside wall or in an unheated crawlspace. Remember there's one classic preventative measure that almost always works, just leave the faucet dripping slightly to create a trickle. The dripping water will keep the water in the pipe from freezing.

What to do when the pipes are frozen but not burst? Then It's Time to Thaw! 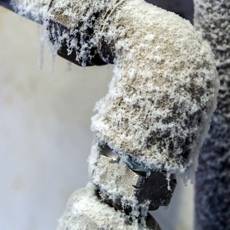 In the event that the pipe is frozen but hasn't burst yet, the best thing to do is defrost it. Here we'll share a few techniques to thaw the pipe which vary depending on the location of the frozen pipe. To prevent further damage do not expose your pipes to direct fire and never use flame torches to thaw them. Frozen pipes behind \walls may require opening and repairing the wall.

If when turning on the faucet no water comes out or it comes out in a trickle, it is a good indication that the pipe is frozen. You need to take a few rapid steps.

Use a high power hair dryer to defrost the pipe safely and easily. Open the faucet and then commence the heating. In case the pipe is touching a wall, position a piece of aluminium foil behind the pipe to improve heat radiation on the rear portion.

Use an incandescent or infrared heat lamp to heat an exposed pipe. If the pipe is close to the wall, place a piece of aluminium foil to increase heat radiation on the rear portion.

Small powerful heaters are very effective to warm pipes under a kitchen or vanity base cabinet.

What to do in case of a burst pipe?

At times, water pipes do get burst. We mention the best possible steps that a homeowner should take. It can make all the difference between a problem and a total disaster.

Leaky House: 5 Ways to Spot the Problem like a Pro

Top 5 Reasons to Call a Plumber

What to do when you have frozen or burst water pipes?

How to Kill Moss Naturally: 3 Recipes for Natural Moss Killer

Painter's rates: how to estimate a job